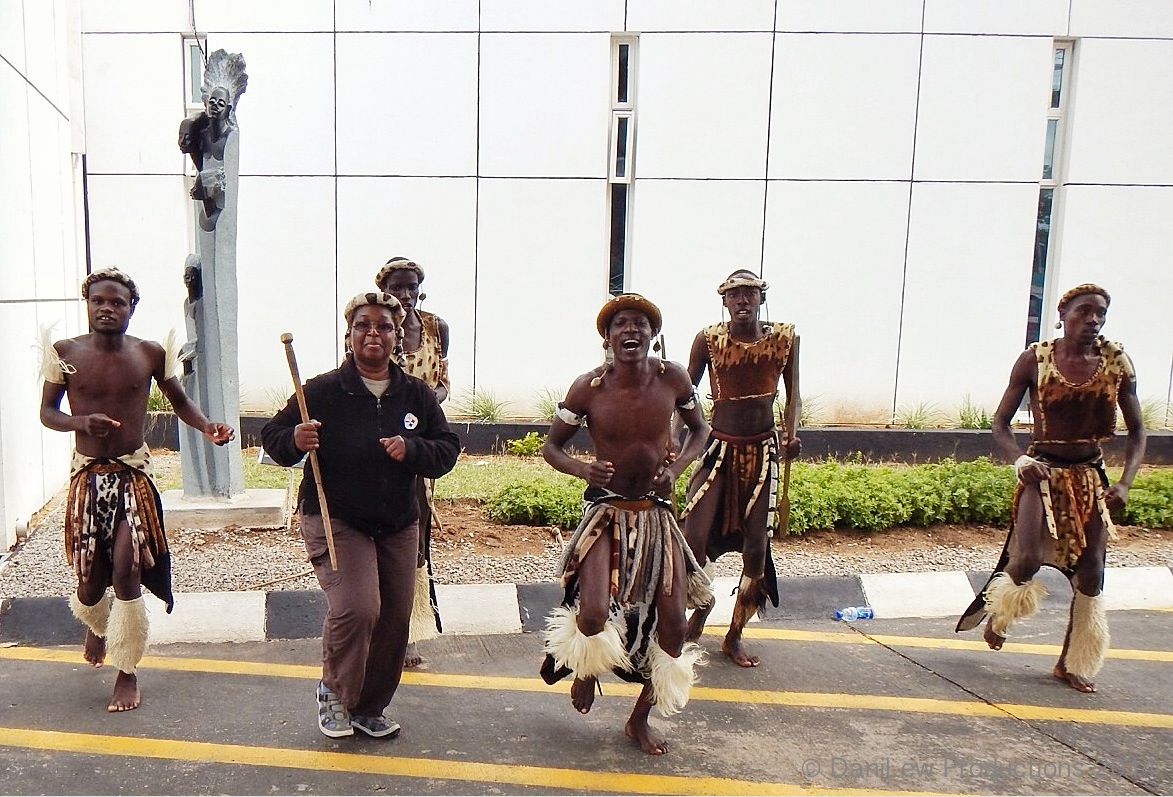 Day Six– Saturday, April 12, 2014: this was a quick travel day as arranged per the Tydon Safaris 12-day Exclusive Tour.  I took the Eagle Rock Executive Guest House complimentary shuttle to Johannesburg airport.  It was a lovely place to stay near the O.R. Tambo International Airport but the meals were hugely regrettable.

Anyway, the British Airways flight to Victoria Falls Zimbabwe was less than 2 hours – a chicken or veggie sandwich was served for lunch along with free drinks (alcohol included).  I had to pay $25 for extra weight on luggage but I didn’t mind – it was what it was and I would have to do this at every airport.

Victoria Falls International Airport is tiny – smaller than Grand Cayman airport – which was a shock since the falls are the major tourist attraction in that country.  There were two lines – one for those with a visa stamp in their passports and those without.  It was only $45 for a double-entry visa which I needed because I was also going to Botswana for a safari while I was staying in Zimbabwe but the line was long; it took an hour.  By the time I got my luggage, Wild Horizons tour company shuttle was there but I would have another 30 minute since there were more passengers to wait for.

I spent my wait-time dancing with the Zulus outside the airport entrance.

Me and Zulus dance at Victoria Falls airport in Zimbabwe

They had wonderful harmony and were very entertaining but as soon as I put a few dollars in their donation box I was coerced into joining them for a jam session while one of the members took my photo.

Finally, all were assembled and the shuttle took us to our designated hotels.  The Kingdom at Victoria Falls is huge.  It has several pools and a casino and is only a 10 minute walk to the actual falls.  It is also the sister hotel (and next door) to the famous Victoria Falls Hotel where you can have High Tea on Stanley’s Terrace with a great view of the Victoria Falls Bridge.

Anyway, room #2125 was very nice!  My room was in the main building – on the quiet side – overlooking the pond and far enough away from the pool.

Room #2125 at The Kingdom Hotel at Victoria Falls, Zimbabwe

You do get a warning when you check in: “if you like fresh air, please remember to at least close and lock the wooden shutters – this is Africa and wild animals such as baboons and monkeys like to get into the rooms and do a little a damage”.  It is true.  As soon as I went on the balcony to look at some large birds, two mischief-makers scrambled up a tree near me.  I jumped back inside as quickly as possible and laughed at myself afterwards.

At 4:00 pm, a Wild Horizons shuttle picked me up at the hotel for the Zambezi River Sundowner Cruise.

By 4:30 pm, we were on our way up the Zambezi River that splits countries Zambia from Zimbabwe.  Ours was the double-decker cruise boat; it was about 80% full and there was room to move around.

Included with the cruise were hot and cold appetizers and drinks (alcoholic and non-alcoholic) and the captain steered the boat close enough to “The Smoke that Thunders” but not close enough to get pulled into the surge of Victoria Falls.

I sat at a table with a Zimbabwean couple celebrating their 20th anniversary.  They were very nice but only spoke a little English – of course, I only speak English – and while it was tough to converse I enjoyed seeing pictures of their children and learning that the husband’s brother lives in Baltimore, Maryland.

For more than 40 minutes, we watched a group elephants gamboling in the water.  They were young bulls (males) sparring and play fighting to determine the level of strength and power as part of their dominance games that begin when they reach a certain maturity.

With tourists watching, Elephants frolicking in the Zambezi River, Zambia

After a disappointing showing in Kruger NP/Sabi Sands, I finally managed to catch a hippo yawn – twice!

What a major coup for me.  It was a lovely way to end the evening since the sunset was really a bust.

Also at my table was a doctor named Carla, from Costa Rica, who specializes in Pediatric Infectious Diseases.  She’s on the board of the International Society for Infectious Diseases and spoke at a meeting in Cape Town then spent some days in Shinde and Khama, Botswana bush camps before arriving in Victoria Falls.

The doctor and I were staying at The Kingdom Hotel so we decided to have dinner together.  She had some great stories to tell of her time in Africa and the buffet was very good.

Dining room at The Kingdom Hotel at Victoria Falls, Zimbabwe

One thing hotel reception did not mention to me is that I should’ve opened an expense account at check-in for anything purchased in the hotel including the dining room, activities desk, shops and casino.  Both Carla and I suffered the same misinformation so, thankfully, our embarrassment wasn’t too severe.  The server handled it quickly and quietly and I was able to go back to my room by 8:30 pm.