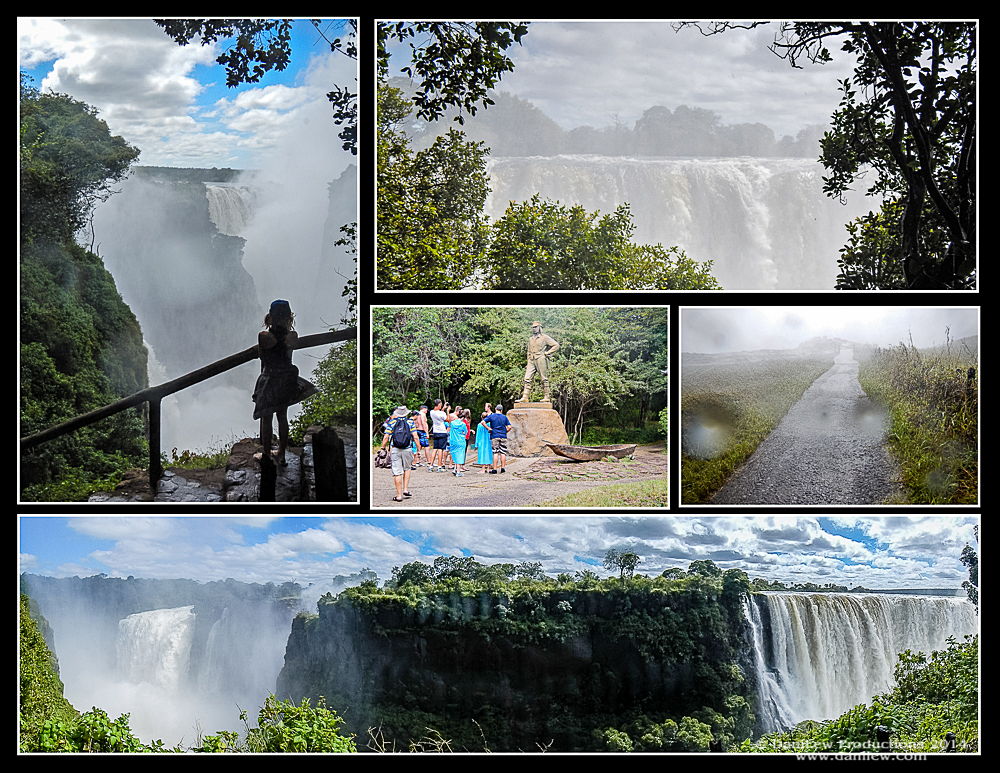 Kingdom Hotel laid out a great breakfast of bacon, eggs, french toast, pancakes (that tastes like cake), fruit: lychee, papaya, oranges, and watermelon. And, of course, coffee and water.

As part of the Tydon Safaris 12-day Exclusive Tour, a shuttle bus picked me up out front of the hotel for Wild Horizons tour of Victoria Falls!

Outside of The Kingdom Hotel in Victoria Falls, Zimbabwe

Victoria Falls is the largest waterfall in the world because of its combined height and width.  It was brought to the world’s attention by explorer David Livingstone in 1855 and stretches across Zambezi River that is shared between two countries: Zambia and Zimbabwe.

Our tour guide suggested that we start at the end of the Footpath and work our way back.

So, we walked on a paved path through the rainforest to Viewpoint #16 – Boiling Pot – the overlook to Victoria Falls Bridge.

Here, perhaps you might see a bungee jumper but you can almost always find a rainbow or two.

April is one of the months that the waterfall’s flow and power are at its maximum and normally you can’t see anything beyond the mist.  As a group, we decided to skip Viewpoint #15 – Danger Point, because we could barely see a foot in front of us and as you can tell on the map above, it leads to a cliff!

There were several other “safer” viewpoints that were a complete whiteout – you could not see your hand in front of your face.

The roar of water powerfully rushing over the cliffs was deafening.   This must be the best time of the year to see Victoria Falls in all its glory because you can truly understand why the natives called it “The Smoke that Thunders”.  Our tour guide could only point out an overlook or huddle us together to share some history.

Fortunately, as we ambled back to the beginning of the footpath, we found a few windows of light and rainbow and water and rocks!

Standard issue when you check in at the Falls is a raincoat.  And luckily on our way in, I saw a few tourists crying over their ruined cameras and, while I worried about my DSLR hidden in a bag beneath my raincoat, I pulled out my brand new Coolpix AW110 waterproof camera; it saved the day!

Seriously, the tour company should’ve issued a warning in the options package that I received – wear shorts and water shoes!

The correct clothing to wear in April for Victoria Falls, Zimbabwe

These girls were smart.  And I was envious.  I was way overdressed for a trek through the rainforest and got so drenched, with the raincoat, that it felt like I peed my pants. I could not believe that even my underwear got wet!

I came back to my room and changed clothes.  I literally had to peel off soaked hiking boots, socks, pants, and shirt. My Lowepro sling bag got soaked even though I tried to protect it under a second raincoat and, thankfully, my Nikon D300 hadn’t drowned. My passport got a little wet too.  My hiking boots actually took 4 days to dry out.  Fortunately, my sling bag, with help from a hair dryer, was usable by the next morning.

I was happily exhausted from the walk – at least 1 mile each way – yet I was even more hungry.  So I left my room to scrounge for some food.  The dining room only served breakfast and dinner but I ended up having an excellent lunch at the pool bar. The “Famous Club” sandwich: fried egg, bacon, and a cheesy mayonnaise, also came with fries and salad. Everything was delicious!

Later in the afternoon, a bus picked me up for the Zambezi Helicopter Company’s Zambezi Spectacular ride over the Falls.  Once at the site, they split us into 2 groups in the waiting area: 15-minute ride and 30-minute ride.

It was expensive – their currency is the US Dollar – but I didn’t come all the way across to the other side of the world for 15 minutes.

The flight was just as amazing as being drenched!  The advantage of seeing the falls from above is NOT to be missed.

Aerials of Victoria Falls, elephants and Zambezi River waterways of Zambia and Zimbabwe

We also saw elephants and giraffe from the sky as we flew up the Zambezi River for some breathtaking scenery.

I came back to my room with a large smile on my face. I quickly wrote up my notes and rested for a bit until I met Carla again for dinner. I suggested the pool bar, she agreed, and I had the “Melting Pot Platter” that had beef, chicken, prawns, etc.  Very Good.

Despite the wonderful safaris of the past week, this was the best day of my vacation so far!

The smile remained as I was lulled to sleep by the wildlife outside my balcony doors.