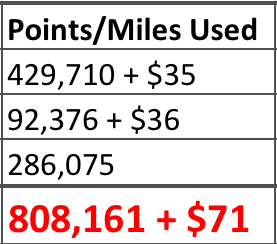 Points and Miles Catch-up in Christchurch

I needed a day to try to catch up on my writing and the rain this morning in Christchurch answered my prayer.

And because it’s been more than a month since my Park Hyatt Sydney post, I figured I also needed to catch my readers up on how and where my points and miles were spent.

So… Sunday February 4, I flew business class on Qantas (Sydney to Launceston) for 20,000 American Airlines points +$19 otherwise it would’ve been in $501.

From Sunday February 4 to Tuesday February 6, I stayed 2 nights at the Balmoral on York in Launceston for 36,903 AMEX points otherwise it would’ve been $258.32.

Bay of Fires at Binalong Bay in Tasmania

On February 6, I took a 9-day Tasmania Tour with TravelMarvel for $2780 then used 278,000 Chase Points cash redemption. This tour included awesome sights around the state such as Cradle Mountain, Port Arthur and Bruny Island plus almost all meals.

Hobart, Tasmania, Australia
From Wednesday February 14 through Sunday February 18, I stayed 4 nights at the RACV/RACT Hobart Apartment Hotel for 65,515 Chase points otherwise it would’ve been $818.94. On an even more positive note, I was upgraded to a One Bedroom Deluxe Apartment with a great view of Mt. Wellington

Sunday February 18, I flew business class on Qantas (Hobart to Melbourne) for 20,000 AA points + $17 otherwise it would’ve been $372. Note: Qantas did not supply enough meals for business class so row 3 was out of luck. I logged a complaint on the website and on twitter with no response… we’ll see how that goes.

Melbourne, Australia
From Sunday February 18 through Wednesday February 21, I stayed 3 nights at the Grand Hyatt in Melbourne for 45,000 Hyatt points otherwise it would’ve been $850. I also used one of my upgrade certificates and received the Grand Suite King room with an amazing 180 degree view of Melbourne CBD.

Inside look at Grand Suite King at the Grand Hyatt Melbourne

Auckland, New Zealand
From Wednesday February 21 through Monday February 26, I stayed 5 nights at an Airbnb with a wonderful sunset view of Auckland Harbor for 65,950 AMEX points otherwise it would’ve been $507.29.

Swans and a tourist at Lake Rotorua

Wellington CBD from the Boatshed

Thursday March 8, I flew economy on Air New Zealand for 17,500 United miles otherwise it would’ve been $101.

So as you can see I’ve saved a lot of money by using points and miles instead of cash.

Points and Miles used from February 4 to March 13

Stay tuned for reviews of tours and some hotels!

The journey continues in Points and Miles Catch-up in Canberra.