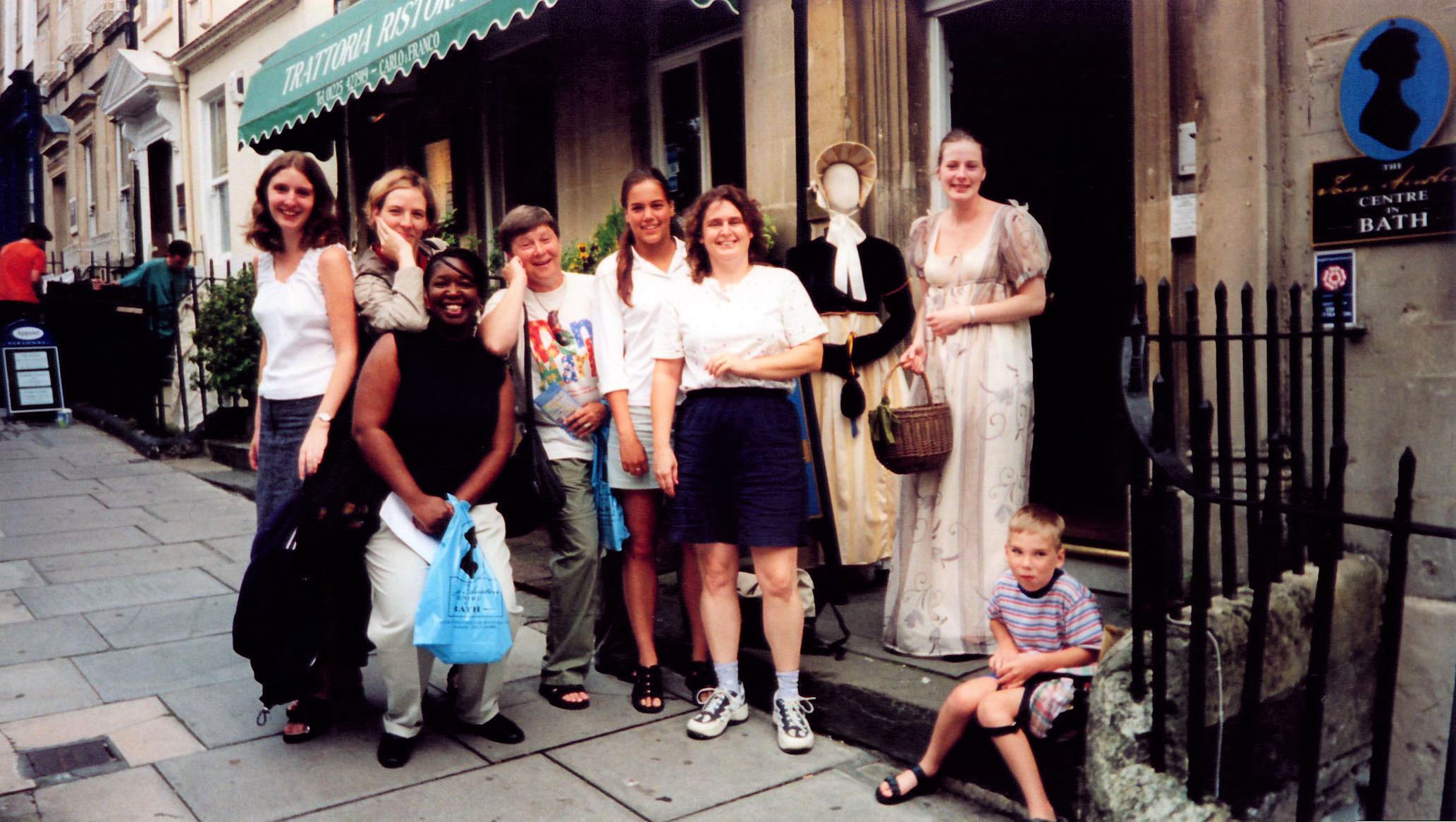 Slow Traveling Soul Sister podcast: get to know me – Episode 005

Episode 005 is where I discuss my 21-day European Whirlwind Tour and its impact on my life.

The first vacation that changed my life’s path was my 2001 Solo Whirlwind Tour Around Europe (7 countries and 9+ major cities in 21 days) using the extensive multi-country European Rail System in this order: flew to London, flew to Paris, took the train to Lisbon, train to Madrid, train to Barcelona, train to Milan, train to Rome, train back to Paris, chunnel to London, train to Bath England where I met up with a Canadian friend and her young son. We’re both huge Jane Austen fans and we drove around the English countryside for a couple of days, then she dropped me off in Manchester, I flew to Dublin to spend some time with my old boss, then flew to Copenhagen and met up with my friend and her son again and we stayed at another friend’s house for a couple of days, flew back London then home. Whew!

DaniLew and friends at the Jane Austen Center in Bath England

So that was England, France, Portugal, Spain, Italy, Ireland, and Denmark in 21 days. All before the Euro, so I had to learn the English pound conversion to US Dollars, along with the French Franc, the Portuguese Escudo, the Spanish Peseta, the Italian Lira, the Irish Pound, and the Danish Krona. Add on top of that, back in 2001 I didn’t have a cellphone or google translate so it was disastrous even trying to remember common phrases in all of the different languages spoken.

Strangely enough, I had zero problems. Do you want to know why? Because despite my lack of language skills in all those different countries, if I looked lost someone was always willing to help (whether it was to find a street, a monument, or even confusion over a restaurant menu) and if I asked for information from anybody on the street, I got a smile and a willingness to be of service. Even if they had to go find or lead me to someone else to answer my question. Never happened in the USA, at least not to me.

After meeting all those friendly helpful people all over Europe, I came back to the USA and decided that I would retire to Europe. The place that checked off all my wants in 2001 was Barcelona, Spain. The Food, the architecture (I’m a huge Antoni Gaudi fan), the people, the beach, the marina, etc. Barcelona Spain had it all.

This bold move, however, would require me to plan and strategize for the next 16 years from 2001 to 2017. From that time I started to pull way back on my spending. What’s that old saying: man plans God laughs… Unfortunately, after returning from Europe my SUV needed a new engine so it was time to buy a new vehicle. I carefully researched and purchased a car that I thought would last 17 years or longer. Fortunately, my new Nissan Maxima (Black on Black Sports Edition with the Titanium Package) lasted even longer than that.

As an only child, the only person that I felt would truly be affected by my move was my mother, because she doesn’t travel much. She would never come to see me overseas. So I needed to get her prepared for my move sooner rather than later, so every time I saw her throughout those 16 years, we discussed and I re-iterated that I was not going to live in the USA when I retired. I also prepped my friends and other family members. Granted, some didn’t like it, including my mother, but their opinions really didn’t matter in the grand scheme of things. I don’t let anyone chose for me, just as I don’t let anyone live my life for me.

Yet everyone who knew me or knew of me, had heard from my mouth or from the mouths of my family and friends that I was moving to Barcelona, Spain as soon as I retired. Some of them couldn’t wait for me to move there so that they could come to visit. However, in 2016, after I sold my house, I secretly changed my mind; the freedom from a mortgage was a huge weight off my shoulders and an epiphany.

A Change of Heart

I had “settled” for the American Dream bullshit and it never made me happy so I didn’t want to “settle” in Barcelona; there was a whole wide world waiting for me to explore. I love traveling, beyond almost anything, so I decided, instead, to live the nomad life for a stretch of time.  Besides the fact that Barcelona had been “discovered”; meaning it was no longer cheap and wonderful. It is still wonderful – I have visited 4 more times – but it’s no longer cheap. The cost of living had soared since 2001.

Anyway, I officially retired on Friday, December 2, 2017, at the age of 55 from the Information Technology sector. I sold my house, my car and everything in between then I gave away what I couldn’t sell. I store a few personal keepsakes and tax records at a friend’s house but other than that I’m free as a bird. And I’ve got the confidence to do what I planned to do.

You can’t call yourself a Queen if you’ve never ruled – and that means making hard decisions and sticking to them even if they don’t please the people that you love.