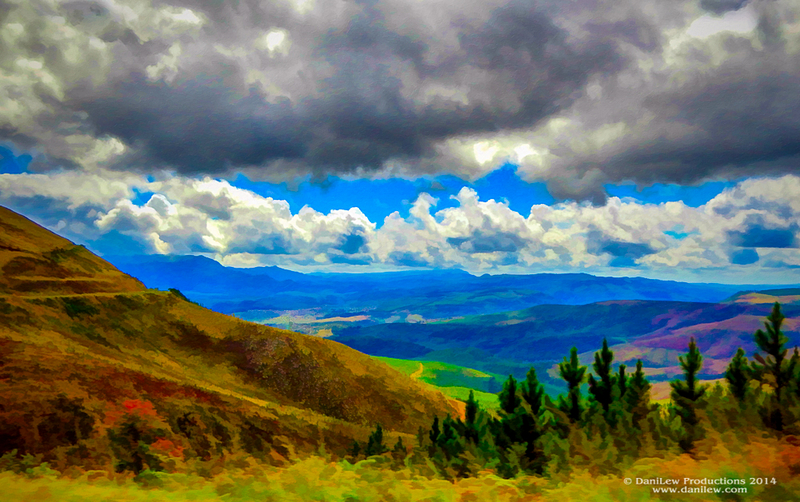 Day Four – Thursday, April 10, 2014:  This time wake up call was 6:45 am and I lingered in bed a few minutes to process my journey so far.  I will have special memories of my time here.

My fond fare-the-well’s to Tydon Safari staff and guides, especially Jacques, were extended the night before and all the other guests were gone on their Sunrise/Morning Game Drives by the time I ambled into the dining hall.

Breakfast was its usual wonderfulness with the added bonus of lamb sausage from the Braai last evening made into hearty stew.

Gavin came to settle up our bills – I had that lovely South African white wine to pay for – and to wish us well as we traveled back to Johannesburg.  I had little left to pack and, per usual, the staff with their noiseless efficiency loaded my bags into the minivan before I even thought of it.

Debbie, the Tydon Safari guide with the great hearing, who rode shotgun on the previous night’s safari had the privilege of driving us (me and the family living in Bangkok, Thailand) through the famous Panoramic Route in drizzling rain and, at times, a heavy thick scene-stealing fog.  I was sorely disappointed to be leaving the Tydon Safari Camp that day and the dreary weather agreed with my mood.

Our first stop was The Pinnacle Rock.

It was very foggy and we were able to see the solitary quartzite tower but little else.

God’s Window, our next stop, was closed.  There it was very foggy and wet and with the steep footpath that was practically invisible to us, we decided as a group not to venture down there since we probably wouldn’t see anything anyway.  I will come back to South Africa, some day, and stay several days in this area; just to see everything at a slower pace.

Our next stop was the breathtaking Lisbon Falls.

There is no better way to explain those beautiful falls rushing into the Lisbon River, except to make as many pictures as you can.  The rain had let up on this side of the valley and I ran to the overlook, with all three cameras, to get some shots before the fog rolled back in.

Our next stop was Curio D’Afrique in the town of Graskop for what I thought was some quick souvenir shopping.  However, this tiny store had much more than what I had imagined; beautiful hand-crafted collector’s items and artifacts!

I believe the Bangkok family purchased those two statues they are looking over in the image above.

We added our new loot – I purchased some Kenyan bracelets for my friends – to our luggage in the back of the minivan and strapped in for a long ride.  Conversation was easy between all of us – my mood had considerably brightened – and the family pointed out some interesting scenery while I tried to take pictures through the front-passenger side windshield.

Landscape (digitally painted) taken from the highway on the Panorama Route in Sabie, South Africa

Construction on a bridge delayed us for 30 minutes and I had time to inwardly ponder how familiar this scene was to the I-95 road work back home in Virginia, USA.

Seriously, some of my friends and family were afraid for my life as they imagined South Africa to be nothing more than dirt roads with wild animals and angry spear-chucking natives hoping to behead or impale me. 🙂

We eventually stopped at a gas station on the main highway and I had a delicious Trout Wrap for lunch from the station’s eatery, Milly’s cafe.

After dropping off the Bangkok family at their hotel in Johannesburg, Debbie and I arrived at the Eagle Rock Executive Guest House around 3:45 pm and checked in.

From what I saw, most of the guest rooms were decorated differently and I loved the subdued tones in Room #9.  The room was rather large and I could probably have done a cartwheel in the bathroom if I was so inclined.

I had 2 Castle Lagers (South African beer) and spaghetti bologna and salad for dinner in the dining room; the meal was okay – not like Tydon Safari Camp – but I still ate everything on my plate.  And after writing up my notes, I watched some highlights of the Oscar Pistorius murder trial then switched over to a Cricket match before closing my eyes to sleep.