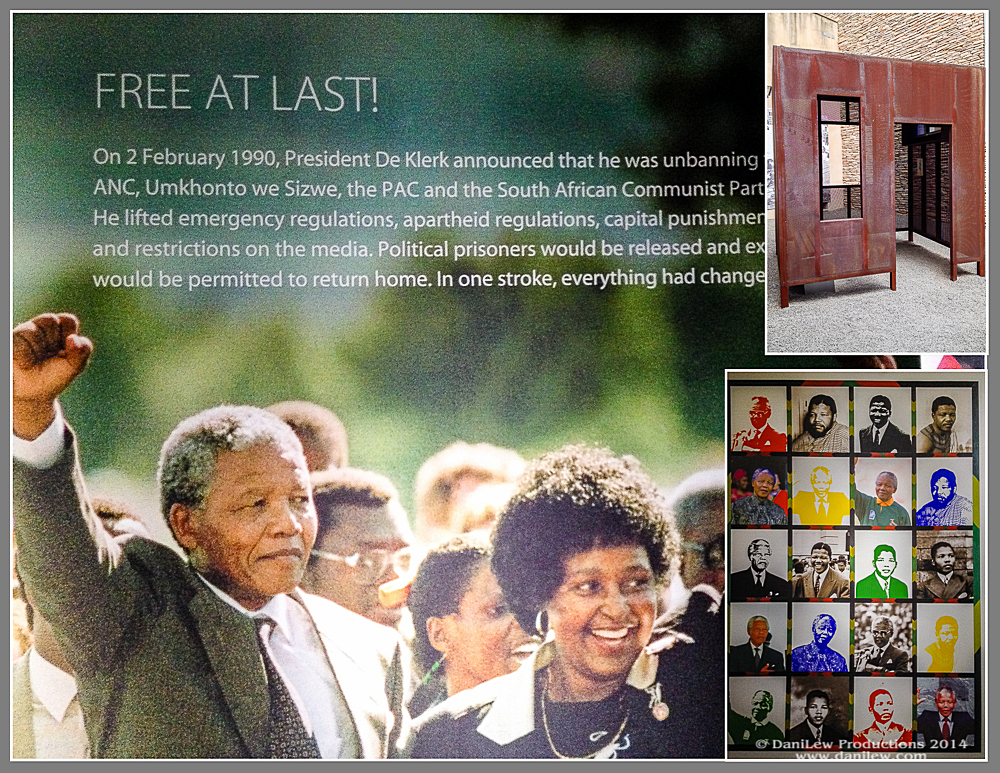 Just before 9:00 am, I let the MoAfrika Tours minivan into the gate of Eagle Rock Executive Guest House – the room key includes a fob to the gates – and there was only one other passenger inside, Susanne from Berlin Germany.  Susanne had been visiting Africa for the last 20 years and since her retirement had been spending 6 months of every year in one country or another; this year it was South Africa.  I had a feeling that this would be an intimate look at Johannesburg from an entirely different perspective.

We drove to Constitution Hill which shares the grounds of the Old Fort Prison.  Constitutional Court is a beautifully designed complex where only the laws regarding the entire country are discussed, amended and/or added.

The Old Fort was a heinous detention center – known for its cruelty towards non-whites – that held some world famous political or anti-establishment detainees, namely Nelson Mandela and Mahatma Gandhi.  Now it is a museum.

There is a separate exhibit hall for Mahatma Gandhi who spent a great deal of time at this particular prison.

We then drove over the Mandela Bridge and through the downtown the area so that we could get a little taste of the inner city.  We parked at the Carlton Centre – the tallest building in Africa at 50 stories high – it is an indoor mall, office building and former hotel complex.  The top floor has a panoramic view over Johannesburg that is called the “Top of Africa”.

Johannesburg, often called the City of Gold by the locals, is the financial capital of South Africa.  It’s a sprawling gritty city with glass and steel high-rise buildings, a warehouse district, and ancient government offices filled with hard-working people based there from around the world and plagued by street vendors peddling their wares to every passerby.  Yes, the rumors are true, there are some parts of the city that no one should venture into, even by accident, unless they’re looking for trouble.

Actually, it reminds me a lot of how Washington, DC – USA’s Capital City – used to be 20 years ago.

We then went to Freedom Square and visited the Kliptown Open Air Museum which is dedicated to the history of the 10 Pillars of the Freedom Charter.

After we purchased a few things from the Freedom Square street vendors, we moved on to the Apartheid Museum.

I knew that this Johannesburg tour would leave very little time for a thorough exploration, so my GodSon (who was volunteering with the Peace Corp in Lesotho, South Africa) and I toured this facility together only a week before.

The images and descriptions are stirring and horrific and I can see why children under a certain age are not allowed and that you are not allowed to take your own pictures in certain parts of the museum either.

Touring the museum again with Susanne was an experience that was unexpected but welcome.  During lunch, she had a lot to say comparing apartheid to the holocaust and while I had envisioned apartheid more like slavery as opposed to annihilation, I did appreciate the parallels.

There is also a special temporary exhibit hall separate from the actual Apartheid Museum, currently commemorating Mandela’s life: from his father’s village to his death.  It is not to be missed!

We then traveled through the infamous streets of Soweto: a neighborhood that was the hotbed for freedom-fighters against Apartheid.  Soweto (South Western Township) is also rumored to be a dangerous neighborhood full of the poor, forgotten and desperate.  That’s not entirely true.  We drove through different sections (upper class, middle class, and lower class) and spoke to several people on the streets.

Some parts of this area looked just like the projects where I grew up in Pittsburgh, PA.  Anyway, I was in a buying mood and purchased several items around the neighborhood.

We stopped for a visit at the Hector Peterson Memorial in Soweto where the immortalized image of the young boy dying in his friend’s arms was graphically displayed.

Our final destination was the Mandela House (now a museum)  on the corner of Vilakazi and Ngakane Streets in Soweto.

Archbishop Desmond Tutu’s house is also just down the end of the block.

Our guide, Dewey, was fantastic. Very intelligent with a lot of information to share and made this day of enlightenment both meaningful and interesting.  Susanne and I were just chatting away about all we learned and exchanging Facebook info as we rode back to the Guest House.  I was sad to know that the tour was over but I was truly exhausted and didn’t think my brain could absorb anything else.

Dinner was less-than-stellar: Lamb burger and cold french fries.  Oh well.  I had a Buffalo burger at the Apartheid Museum that I wasn’t too happy with either.

I then went to my room to write up my notes before falling asleep after a very long day.