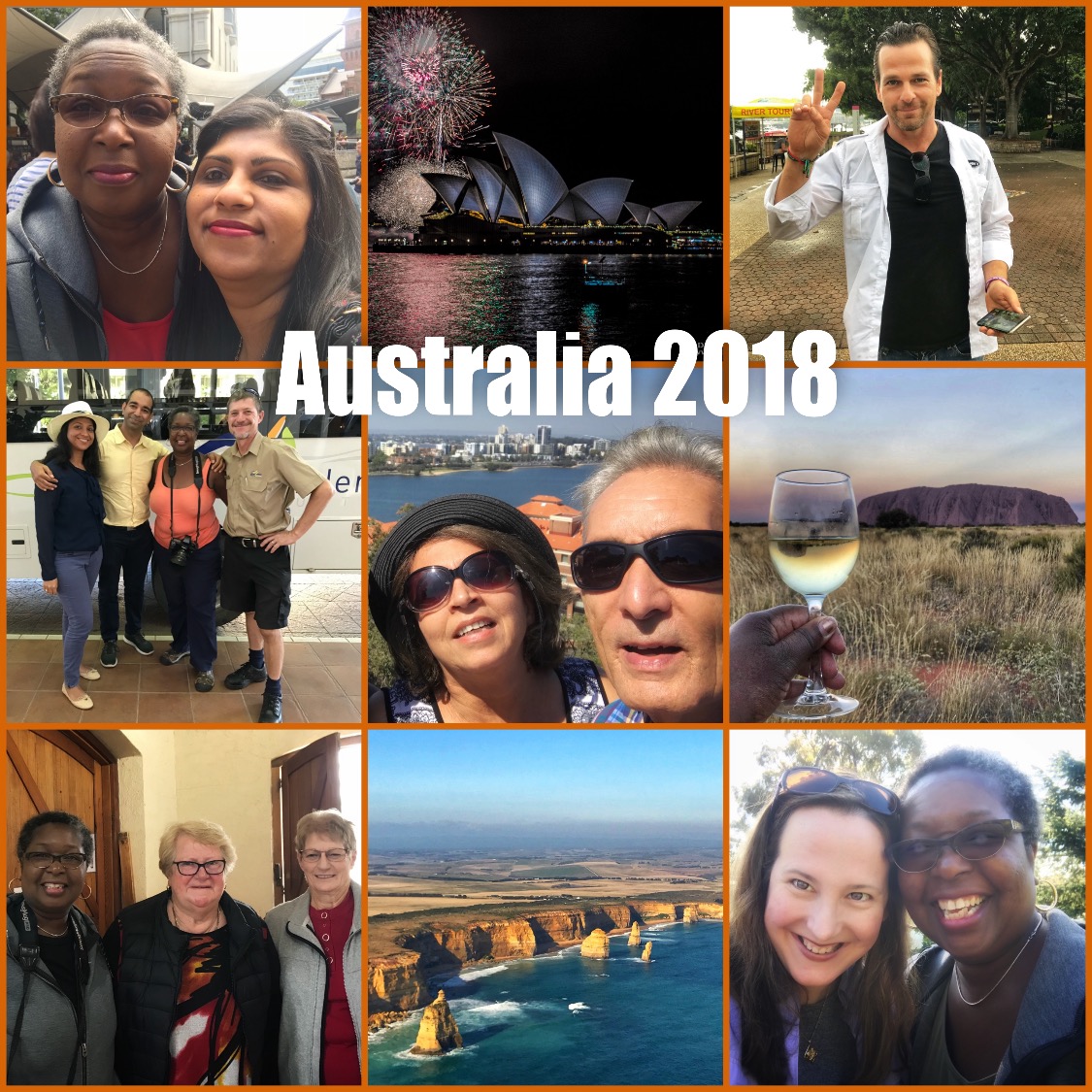 Episode 014 – Solo Travel – Australia: where I discuss my 3-month trip to Australia and New Zealand, the strategies to get there, and the forever friends I met there.

I worked for the same company in the DMV (that’s Washington DC, Maryland and Virginia) for 26 years but then I did something totally out of the ordinary – which if you know me, you should know that I rarely do anything by a standard or in a conventional way. What did I do? I volunteered to be laid-off.

The company was hurting financially, and they were laying off groups of people every month so… I volunteered at the age of 50 to be laid off. My upline was, of course, shocked but I figured that for 26 years of loyal and dedicated service, I deserved to be treated with respect as I walked out the door, unlike most people who get laid-off and are literally dragged out the door and can barely get their purse or their keys. And respect is what I got. I chose my own date for termination, got a going-away party at work, and dinner at a nice restaurant. Plus I taught a colleague, my Manager, and my Vice President how to do my job in secret meetings for nearly 3 months before I left. In addition, they brought me back as an outside consultant the following summer for a major upgrade to one of their systems. But I planned this lay-off exit over eight months…

So what does this have to do with Australia? Well, one of my lifelong travel dreams was to visit Australia. However, I knew I wouldn’t get my fill of the continent in a 2-week run-through as most people do, so I plotted for a longer stay. Because really how often am I going to get to that part of the world? And that meant it wound up as my retirement dream trip. Also knowing how expensive it is to get there, eat there, and live there I made some adjustments to my lifestyle with 5 more years before retiring… So after resting, relaxing and vacationing for almost nine months during my layoff, I applied for a consulting job with a company that knew of me and of my experience. Consulting as a Business Analyst to fix broken deployment projects of a web software that I knew like the back of my hand is what I did for those next 4+ years prior to my official retirement. As I said before, visiting Australia for an extended period of time was going to be very expensive and I needed to strategize for those next 5 years… For most of my consulting years, I lived in hotels in Scottsdale, Arizona and Dallas, Texas, and on occasion in San Jose California where the tech company resided. I retired with nearly three million points and miles all for my 3-month Australia and New Zealand retirement trip.

Almost every flight and hotel to and between Australia and New Zealand cost me slightly less than two million points and miles and because of my consulting strategies, I had high status in the four major US hotel groups and two of the three major US airline alliances.

Now, Australia has some great cities, wonderful food and drinks (wine!), amazing landscapes, I did not run into any animal, reptile, or spider that was poisonous or lethally dangerous, but it was the people that set it apart.

So from February 1, 2018 through April 29, 2018, I visited the following cities and met some incredible people:

(3) plus a 10-day escorted tour around Tasmania;

(6) one month in New Zealand visiting both the North and South Islands;

(7) back to Sydney, Australia again;

I was truly saddened to leave. After 55 years, the freedom of waking up and getting ready for the day (or not), going where and when I wanted to, and not worrying about being pulled over by corrupt cops or someone shooting me down because of the color of my skin was, to say the least, a huge relief. I knew I had made the best decision of my life to retire at that age.

I headed back to the USA as promised, unfortunately. However, it was for important birthdays, a memorial, and Mother’s Day but then I jetted off again two weeks later to spend the summer in Europe.

Anyway, I have no problem meeting new people anywhere and wherever I go most want to hear about my travels, especially when I reveal that I’ve been “down under”. However, an acquaintance (a Black female from the US) once remarked to me that she didn’t want to go to Australia because of the way they treated the Aboriginals: how they took their land and babies. I could not keep my thoughts to myself when I said “Yet you have no problems living in America or how those same missionaries and colonizers raped, pillaged, and cheated the Native Americans here or how they did the same to our ancestors in Africa AND brought us over as slaves. In addition to retiring – of your own free will – to Georgia after the 2016 election? At least the Australian government officially apologized to the Aboriginals! We never got that in America. We never got our 40 acres and a mule.” Ooh, I had to walk away and calm down. How do you live amongst your enslavers, forgive them, and then make it seem like it was someone else who did the dirty deeds of using and destroying black and brown nations around the world? The gall!

Never mind about that now. Think good thoughts. Breathe. As you can tell, that statement still affects me as does other stupid remarks.

Anyway, I did discover that a good bit of the Aussies are just as ignorant about their country as Americans are about theirs: most Aussies had never been to Tasmania or Perth! Same country just a different state. Same as it is in the USA; a good portion of Americans have never left their own state for any reason. I still find that a hard pill to swallow but I understand that wanderlust is not in everyone’s DNA. I also had to set a few Aussies straight on our then president and the divisive tactics he used to win the 2016 election. You see Australia has its own version of fox news, so some people had their world news kind of skewed. However, most of the people I chatted with were aware of the real situation.

Regardless of a few small-minded people, Australia should definitely be on everyone’s bucket list, travel dream list, or wish list. I’ve heard that it can be done in two weeks but that’s the same as saying the USA can be done in two weeks. Yeah, right… Only if you do Sydney, Melbourne, and the Great Barrier Reef – same same as New York City, Washington DC, and Miami. Do those cities represent the whole US? No, I don’t think so. There’s a whole lot to explore on an island that is almost the same size as the continental USA.

I truly made some “forever friends” on my Australia and New Zealand 3-month odyssey. We are all facebook friends but for the majority of them we also email and/or message each other on a regular basis, just to keep up-to-date on our lives.

You can’t call yourself a Queen if you’ve never ruled – and that means re-evaluating your pre-conceived notions and prejudices of other countries, races, and religions. America is far from perfect and isn’t thought of as highly around the rest of the world as it used to be. But you would only know that if you traveled beyond your own borders and especially to countries that don’t rely on American tourist dollars to survive. In those non-pandering countries, you will get real opinions, good and bad. You will find them curious, especially about us… but I’m never offended, I’m just as curious about them and their way of life as they are about mine. Be the Queen who will not hide behind the shadows of fear-mongering, half-truths, and straight-up lies about us and about others. Be that Queen who is forever searching through her history and forging her rightful place in the future. Wherever that may be.